In the last few years, quite a few video marketers have established online video as a way to make a big impression as a superstar personality, without the need for high-tech production resources. Though they represent a departure from the slick world of corporate video spots, online video personalities offer a human element that is quirky, accessible, and relatable which keeps viewers hooked.

As you plan your next video marketing campaign, why not learn from some of the superstars of online video? Here are a few of our favorites to help get the ball rolling. 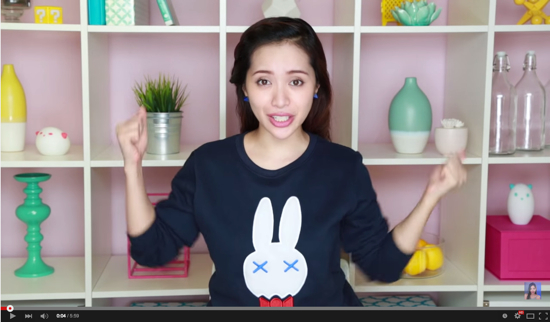 At the time of writing, Michelle Phan has 7.6 million subscribers for her 350+ videos. Michelle started off doing online video makeup tutorials, and has since expanded to other kinds of how-to’s and style guides, like this trend report:

Known for her casual, conversational style of beauty advice, Michelle spun her original expertise as a makeup artist into something much bigger, riding the tails of her early success and tapping into topical issues to join other conversations, while keeping her voice strong as a makeup artist by continuing to upload the videos she’s known for.

The take-home lesson: Don’t be afraid to join new conversations.

Tyler Oakley is a bit of a pop culture icon, known for his LGBTQ advocacy as well as a truly memorable style of discussing current events. With over 6 million subscribers to his YouTube channel, he clearly knows how to appeal to an audience.

While it’s probably not fair to hold ourselves to the standard of knowing the First Lady, it is worth noting what this video does really well that anyone can do: reach out to interesting people to help out, whether those are interesting people on your team or someone outside your team who is relevant to your key message.

The take-home lesson: Reach out to VIPs (Very Interesting People).

What began as an unassuming video prank turned into an all-out prank war between a boyfriend and girlfriend; a prank war that now has almost 8 million subscribers. The concept is simple: prank, retaliate, repeat.

What’s great about these videos is the cyclical nature of the prank war. It could go on forever and never get old — provided the couple keeps coming up with interesting pranks, that is. Although this viral sensation was apparently accidental, you can channel its spirit by choosing an engaging topic with a lot of mileage — a story with multiple parts, preferably one that can go on indefinitely.

The take-home lesson: Make it a series.

Evan, eight years old, is the face of EvanTubeHD, a family-friendly YouTube channel with over 1.3 million subscribers dedicated to toy reviews like this one:

With the help of his dad who does editing and voice-overs, Evan has been making videos since he was six, starting with stop-motion clay animation videos that were just for friends. Now he has kids all over the world, and probably quite a few grown-ups too, tuning in for his latest toy reviews. The majority of EvanTube’s revenue — estimated to be at least $134 million in 2014 — comes from advertising in the videos themselves.

What’s effective about EvanTubeHD is that Evan himself is fairly unrehearsed. Except for the advertising moments in his videos, he’s basically just a normal, unassuming kid who likes to play with toys, and gets excited when he gets a new one. In short, he’s someone his viewers can relate to.

The take-home lesson: Be yourself.

Did we omit someone you think is worth discussing? Leave your comments for us below, or tweet to us!