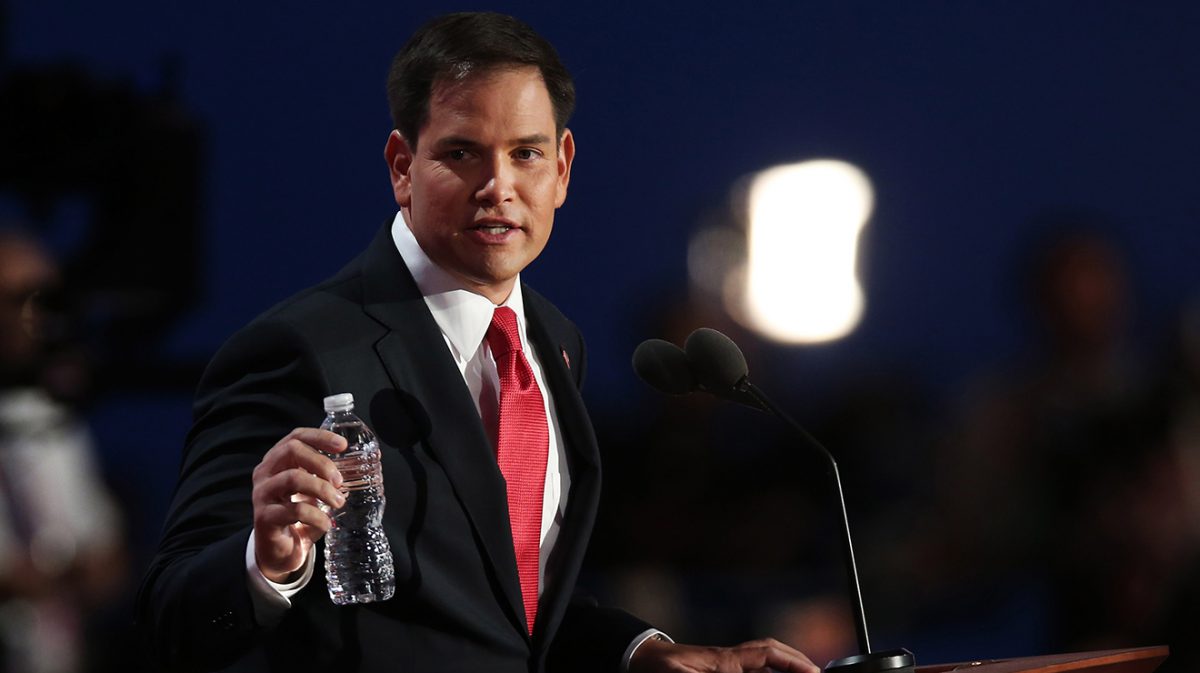 Politics aside, it was difficult not to empathize with Senator Marco Rubio during his State of the Union response this week. Though he did not succumb to his thirst until about halfway through his speech, it was apparent throughout that he was suffering from a severe case of cottonmouth.

While we admit we giggled a bit, we’ll go easy on Senator Rubio and simply use his understandable, yet preventable, gaffe to share a few friendly reminders to help you avoid making a similar faux pas.

How could this tip not be at the top of our list? Whether we’re nervous, filming in a dry location, or simply not used to speaking so much, anyone can fall victim to dry mouth.

If you want to avoid quenching your thirst in the middle of filming, the keys are prevention and preparation. Be sure to drink plenty of water before you begin filming, and during breaks throughout the production process.

If that’s still not enough, consider working a “sip break” into your video. If timed correctly, and done in a relaxed manner, taking a small sip of water can feel very natural. It also can give viewers an extra second or two to process after you say something particularly profound.

While we certainly don’t encourage filming in a parka (unless, of course, that makes sense for your video), we do suggest you keep the temperature on set on the chillier side. With the heat of lights, and the fact that most of us sweat under pressure, keeping your thermostat set to low can help you keep your cool.

Despite the fact that it is now 53 years old, most are familiar with the sweaty, uncomfortable look sported by President Richard Nixon during his debate with President John F. Kennedy in 1960.


Do not walk into this easily avoidable, yet all too common, blunder! Unlike Nixon, who refused to wear foundation, Kennedy understood the importance of appearance when your audience can see you.

Simply apply powder to avoid glistening on camera. While picking up powder at the drugstore, don’t forget to grab anti-frizz hair serum to tame unruly fly-aways, and Chapstick to keep your lips properly moistened while speaking.

Before filming, turn your cellphone off, take loose change out of your pockets, remove clunky jewelry, choose a sturdy chair if you’re seated, and banish anyone not directly involved in the production process. You will benefit from improved concentration if it’s just you and those equally invested in the filming process.

Generally speaking, you do not want to move around in a video because it can be distracting for your audience and difficult to control your background scenery. However, if you must walk from one spot to another, make it easier on yourself.

Using chalk, draw an “X” on the floor of the spot(s) to which you’ll need to move. It may seem silly now, but when you’re speaking on camera, remembering even small details like where to stop can prove challenging. In most cases, your feet are not being filmed so your viewers will ever know the difference.

Solid green and blue can look fantastic on camera but before you don either of these colors, ensure that you will not be using chroma keying front of a green or blue screen…


Unless the floating head look is what you’re after.

Stripes and small or busy patterns look awful on camera and can even hurt people’s eyes. Don’t be that guy or gal.

Additionally, stay away from whites, pastels, nudes, reds, and blacks as these colors obscure the human form on camera unless they’re really fitted. In other words, you risk looking like a blob.

Rich shades of blue, purple, and green (as long as you’re not working against a green screen) stand up well on camera.

You already know how important it is to sound like you are talking to your audience, rather than at them, when you create your video. What you may not realize, however, is how rehearsed and unnatural you may sound if you memorize a script word for word.

The same is true if you rely on a teleprompter. You run the risk of sounding like a robot.

To avoid this, either write your own script, or have a hand in editing it, to ensure the words roll right off your tongue when filming. Then, rather than memorizing your script, rehearse it a few times until you’ve got the gist of it. Next, write a bulleted list of key points on a piece of poster board (held up behind the camera) to reference during filming, ensuring you stay on track.

If you are not the only star of your online video, take extra time to rehearse and gather feedback from the other stars of the show. Remain open to creating a different version of your original script if it makes sense.

Camaraderie is difficult to fake. If you and your fellow video talent are familiar with one another’s speaking style, it will bode well for your final product. Additionally, through rehearsals, you may find you deliver a line better than the person it was originally written for, and vice-versa.

Relax. Smile. Laugh. Blast your favorite song and dance around like a maniac to shake off your nerves. It’s ok if this is done using ear buds and alone in your office!

Your viewers are watching your video not to critique you, but because they like what you have to offer. Don’t work yourself up.