How to Handle a Royal VIP On Set 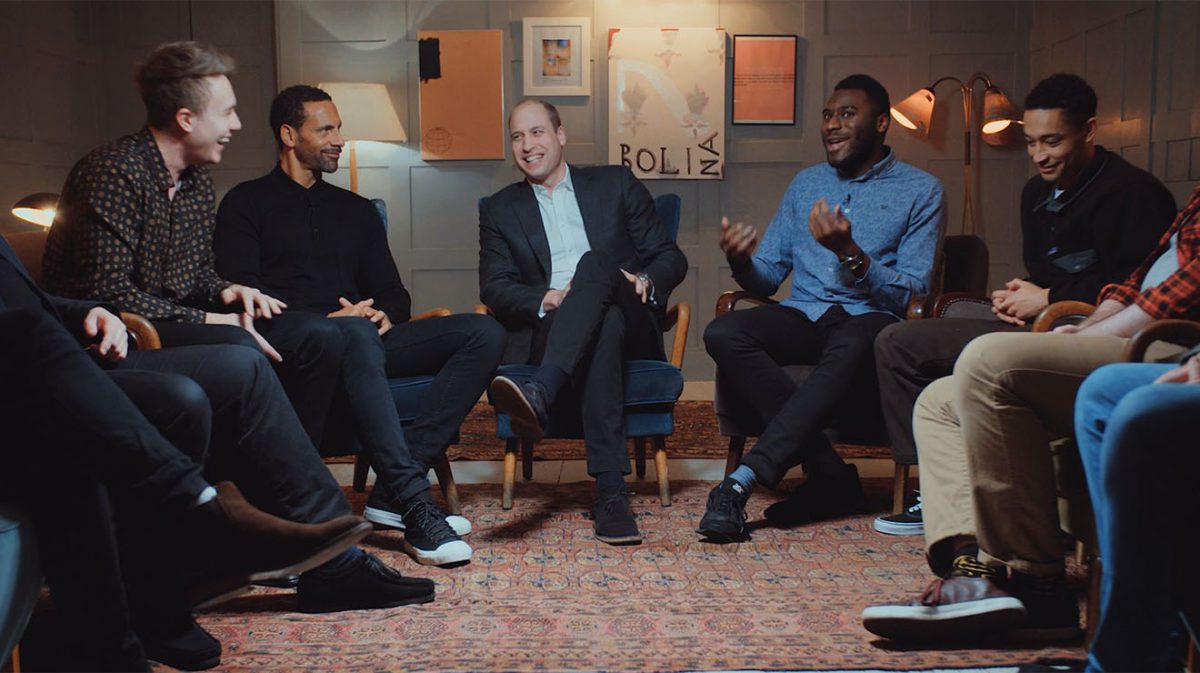 In this guest post from Bold Content Video, learn exactly how to work with a VIP on set, and the important considerations you’ll need to keep in mind.

How would you handle a film shoot featuring a member of the British Royal Family? We at Bold Content Video have recently wrapped a project doing just that.

In fact, our set was packed with VIPs, as you can see in the behind-the-scenes photo above. From left to right: Radio DJ Roman Kemp, Former Professional Footballer Rio Ferdinand, The Duke of Cambridge Prince William, Journalist/Influencer Carl Anka, and Musician Loyle Carner.

While it may seem incredibly daunting to conduct such a high-profile event, with the right tips, it will be simpler than you think. Keep reading for our suggestions to help your next VIP (or Royal!) shoot run smoothly.

This film project was a collaboration between ourselves and the Campaign Against Living Miserably (CALM), a charity aimed at combating male suicide in the United Kingdom. We have been working together on a campaign called the #BestManProject, which encourages men to be supportive to their friends, and to speak up about how much their best mate means to them.

The shoot with Prince William also included other high-profile speakers such as Rio Ferdinand, Roman Kemp, and Loyle Carner. Not only was there Royal pressure, but additional celebrity pressure as well.

Here’s the end result of our video shoot:

Unique Factors to Keep in Mind

Working with a VIP of any caliber requires some special considerations when planning your shoot. Whether it’s a CEO, expert guest, or celebrity, you’ll have more to juggle, and more pressure to get it all exactly right.

By learning from our experience, you’ll have a leg up on the competition when the time comes.

The very first thing that stood out about this shoot was the heightened secrecy. Our Production Manager, Joanna, was one of the few people in the company that knew all of the details of the shoot.

‘Confidentiality was extremely important. It sounds dramatic, but I can’t downplay it—shoot information was a National Security Issue.

All of the information such as the shooting location, times, even the fact that Prince Williams was going to be there at all needed to be kept under wraps. If the location was leaked to the press, it would not only disrupt our shoot, it could also have put our crew and talent in danger.’

While this may seem melodramatic to you, this was our reality. The security of the set was our responsibility. Breaking confidentiality equalled breaking the trust of our client, so we cannot emphasize this enough.

Another aspect that was familiar to us but also much more heightened was our client reviews. Anything and everything we published online that contained footage or stills of Prince William had to be approved by a representative at the Palace. This included any social media posts we wanted to make on the day-of.

While logistics are always taken care of prior to a shoot, the security involved on-set could have caused us a lot of trouble. We got lucky, with the filming location being a closed set. However, were we in a public space, we would have had other challenges such as security checkpoints that our staff would have needed to navigate.

Before you read about our detailed tips for success, here’s a behind-the-scenes look at the shoot, and some pointers from the crew:

Based on our experience, we’re confident you can easily manage a shoot with several VIPs. The key to success is to be heavily prepared, with every minor detail accounted for. Here’s a breakdown of the factors we identified that allowed us to pull off a smooth shoot with all these VIPs.

As with any client project, one of the most important things to make clear is each individual’s responsibilities before, during, and after the project. Making an agenda or task list for staff can go miles towards making sure everything gets taken care of in a timely manner. A group Google Doc could be useful in keeping others accountable and giving the mediator an overview of progress. Daily meetings and constant, clear communication between parties is important to this transparency, as well.

As they say, communication is key. Working between numerous employees in our company, CALM, and the Palace, it was easy to cross wires. We established a specific chain-of-command when it came to questions and/or information
sharing. We had one person at CALM who communicated with the Palace, and one person at our office that communicated with CALM. This streamlined any concerns or questions we had, and ensured that our queries reached the right
person. Again, this is where Google Docs can be helpful. It allows for documentation of communication and ensures there is no overlapping of responsibilities.

We have found from working with other celebrities in the past, oftentimes their time is extremely limited. This was no exception with Prince William: we had exactly one hour in which we could film all of the content we needed. Therefore, it was crucial that we have everything possible prepared ahead of time.

Our in-house director, James, mentioned how he and the crew arrived on-set several hours early: ‘With the first [equipment] turnover scheduled for 4:30 pm, we arrived at 10:00 am to go through both setups and do plenty of crew rehearsals switching between both.’

Obviously, a call-sheet is a must, but we recommend having this call sheet out as soon as is possible (within security restrictions) to give the crew time to brainstorm any issues they may need to remedy prior to shooting.

Although you will certainly be briefed beforehand, make sure you check in with the Palace/your VIP’s representatives on the dress code. For example, we had planned to dress formally, in suits and ties, but in fact we were instructed to dress smart-casual. Meaning: no ties! This was because Prince William himself would not be wearing a suit.

We recommend dressing in layers, and keeping a thing or two in your bag just in case. For men and women, wearing a blazer over your shirt can smarten up your look and is easily removable. Ties, shoes, lipstick, or jackets are all other items you could bring with you to make an easy adjustment if needs be.

Though we did not have this challenge, security has the potential to be a large component of the day. You will need to arrange the usual such as crew parking and equipment transfer, but you may also need to navigate security checkpoints.

Providing your staff with ID badges or lanyards may be a good idea if you will be pressed for time. This way security can easily recognize them as someone who belongs on set. Additionally, uniforms are another way to identify your crew, provided they adhere with the dress code.

As with any celebrity, there are going to be questions you may be burning to ask, but shouldn’t. Pre-approving your questions with the Palace/VIP representative can help avoid any awkward queries.

For example, we double-checked with the Palace to make sure it was acceptable to ask Prince William about Prince Harry’s recent engagement. This discussion needs to take place no matter what VIP you have attending to make the day run smoothly.

Read this guide for ensuring a great video interview if you need additional pointers.

After a high-profile shoot, everyone involved will want to share that they were involved. This will probably include your company’s social medias. We had to get approval from our charity partner in addition to the Palace before we could release anything. Having a communication protocol in place helped make this process quicker. This benefit was really two-fold. It not only streamlined our social shares, but we were also able to produce ‘official’ edits much quicker.

There you have it! Your tips for success:

In short, most of this is no different from how you would go about any other shoot. As mentioned in the video above, you treat your talent (in this case, Prince William and company) respectfully, just as you would any other talent.

You will want to brainstorm any possible malfunctions (Murphy’s Law) and plan accordingly, just like a normal shoot. Check the dress code, check your interview questions, and check your photo/video releases. Logistics may be a bit more tricky than usual but, with open communication, you should know exactly what to expect in terms of security.

You now have everything you need to put on a successful film shoot with a Royal, celebrity, politician, or other VIP!

You can learn more about the #BestManProject here.