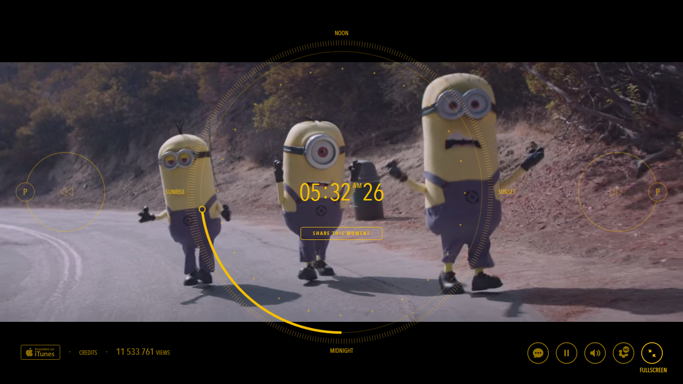 This month’s Video Spotlight is on the epic 2013 music video “Happy” by singer and producer Pharrell Williams, a song that’s still stuck in our head and everyone else’s — for good reason.

The song “Happy” hit number 1 in 24 countries around the world in 2013 and 2014, thanks to the simple yet incredibly effective music video campaign that went alongside it (scroll down to watch it). In this post I’ll run through what worked about the “Happy” video, and we’ll see how you can apply its successful strategies to your own online video campaigns.

The concept of the music video is simple: people dancing. But the thing that makes this concept really special is the long-form video that was released alongside the single and the more conventional, 4-minute video.

The long-form video, titled “24 Hours of Happy,” was exactly that: the world’s first 24-hour music video, exactly 24 hours of people dancing to the “Happy” song—regular people, famous people, young people, old people, and actually a few non-people such as dogs and those minions from Despicable Me.

That’s another thing that helped this video go far: its cross-promotion with not only Pharrell’s album, which was being released off the back of this song, but also the hugely popular Despicable Me 2 film (it’s on the soundtrack).

In total, the film consists of 360 segments of 4 minutes each (since the song is 4 minutes long), with each segment a single shot of someone dancing down the street in Los Angeles. In fact, the entire 24-hour film is shot within a 9-mile stretch of LA, with segments often starting up in the spot where the last one ended, which gives a sort of “tour of the neighborhood” feel to watching it.

Pharrell himself is in the video 24 times, but it’s not really about him — it’s more about all the other people who appear, none of whom takes a starring role. Basically, it’s a film of cameos and short appearances. Celebrities that show up in the video are people like Magic Johnson, Jamie Foxx, Kelly Osborne, Steve Carell and Jimmy Kimmel (and the list goes on).

Some of the best moments of the 360 segments were cut down to create the 4-minute music video that shows up in all the usual places. With so much great material to work from, it’s not that surprising the video was nominated for Best Male Video and Video of the Year at the 2014 MTV Video Music Awards, and that it won the Grammy for Best Music Video overall at the 2014 Grammy Awards. The 24-hour version was also shown at the 2014 Buenos Aires International Festival of Independent Cinema. Well done, Pharrell and team.

While the video sounds like it would be monotonous, it’s actually fun to watch, and something about it just makes you want to share it with other people. Maybe not the whole 24 hours, but definitely the 4-minute video.

There are a lot of reasons why, but here are the ones you can take to the bank, in the form of strategies to integrate into your own online videos.

The fact that there are tons of “real people” in this video makes it a lot more interesting to watch than if it were just celebrities or professional dancers.

The segments of the 24-hour film that were used in the award-winning 4-minute video are those that had the most personality – people who took risks and weren’t afraid to look silly — and it’s great.

It was well-orchestrated in that the single of “Happy,” the 24-hour video, the 4-minute video, and the film Despicable Me 2 were all released at around the same time.

The 24-hour music video is presented with a “Share This Moment” button right there on the screen as you watch, encouraging people to share their favorite moments and making it really easy to do so.

While the video segments were definitely filmed by a professional crew, a huge amount of the actual dancing was done by regular people who wanted to take part.

There was no star of the show, just a lot of people enjoying themselves, and a theme of passing the torch throughout the video(s).

That sense of neighborhood matters to the video, for people who live in LA and also for people who don’t. You feel more friendly with the area, by the end of even just the 4-minute video.

“Happiness” is pretty much the most universal theme out there — just ask Google. Dancing is also a universal activity humans partake in, and it’s surprisingly captivating to watch so many people’s take on the same song.

The “24 Hours of Happy” website still hosts the entire video, and you can watch and share it over and over again.

There’s a lesson in each of these strategies for other videographers. While you may not be able to join forces with a Hollywood production studio to get your video seen, you can join forces with other brands and organizations serving your demographic to see what cross-promotion opportunities are available. You can also try tapping into major events and holidays when timing your video releases so that they coincide with the appropriate zeitgeist. You might not have the resources to hire celebrity cameos, but you can certainly get colorful personalities into your videos, choosing people from your team or area who can really turn it on for the camera.

In my humble opinion, it’s the “no star of the show” aspect of this video that makes it so great. There are many ways that your company or brand can take a different position relative to the spotlight, and turn it back on the people who make it all possible: the fans, the clients, the customers, or regular people. It shows appreciation, and in many ways, that’s what the “Happy” video is all about.

In case you haven’t seen it enough, here is the 4 minute version of the video:

Note on the Team

“Happy” was written and produced by Pharrell Williams, with backing vocals by Rhea Dummett, Trevon Henderson, Ashley L. Lee, Shamika Hightower, Jasmine Murray and Terrence Rolle. The track was digitally edited and arranged by Andrew Coleman and Mike Larson, recorded with assistance from Matthew Desrameaux at Circle House Studios in Miami, Florida. The song was later mixed by Leslie Brathwaite at Music Box Studios in Atlanta, Georgia. Its creative director was Yoann Lemoine, who also directed the videos for Katy Perry’s “Teenage Dream,” Taylor Swift’s single “Back to December,” and Lana Del Rey’s “Born to Die.”