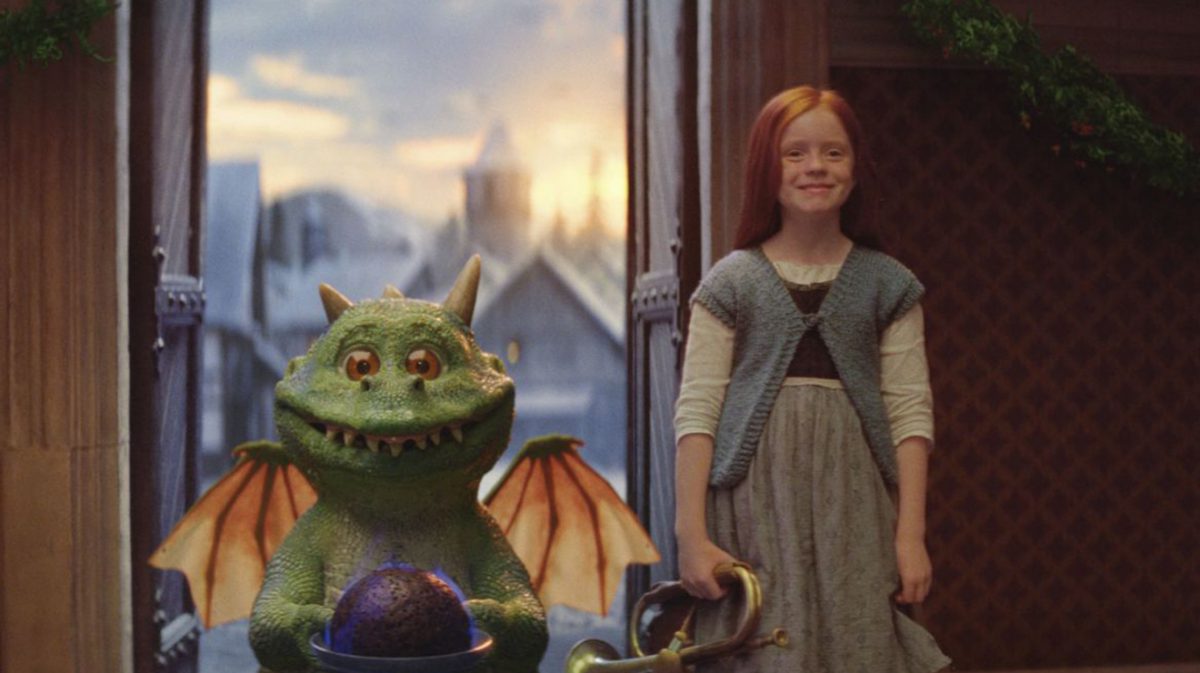 But don’t take our word for whether or not they’re truly the leaders in the holiday ad race – just check the millions of views they’ve racked up every year for over a decade. That type of repeated, viral success is very hard to execute.

In this post, we’ll be breaking down the six aspects of the John Lewis Christmas videos that drive their virality, with takeaways for replicating these strategies in your own videos.

Their ad for 2019 is a shining example of what John Lewis has perfected over the years. The story revolves around a dragon that gets a bit too excited and a friend that is determined to help.

Staying true to form, this video features little to no dialogue, great music, a relatable story, and minimal marketing. These elements are paramount to the success of these John Lewis videos and this year continues the tradition.

For just about all the John Lewis Christmas ads, there has been minimal or absolutely no words throughout. The whole story is told through compelling visuals. This means each scene is that much more important since the story is so visual. This technique is especially important in today’s world. For example,  85% of videos on Facebook are played without sound.

In the 2014 John Lewis ad “Monty the Penguin”, they use visual cues and very noticeable body language to make their point. It is very clear what the penguin is longing for, and the boy in the film finally understands just in time for the perfect Christmas present.

This type of video is powerful for many reasons, and with the right planning, you can create your own. We’ve produced our very own “silent” film and broke down in detail all the elements to make your film resonate with the audience in our guide to producing a compelling video without dialogue.

Music That Moves You

In addition to the powerful visuals in these videos, the music also plays an incredibly important factor in their success. I think we can all agree that without music, visuals for films wouldn’t have the same effect. Think about the stressful music in a horror film; it wouldn’t work as well with a happy, blissful score.

The same applies to these John Lewis Christmas videos. We think each song is specifically chosen for one or two reasons. First, it is warm and inviting. This allows the viewer to take in the message and isn’t distracting. The wrong track might ruin your message.

Secondly, some of the advertisements feature a cover version of well-loved songs. John Lewis specifically uses tracks that you probably have heard before; that makes the film feel familiar. In 2018 they featured “Your Song” by Sir Elton John, and he also appeared in the ad.

While many of us can’t afford custom licensed cover versions of hit pop songs, we’d still suggest taking the time to find music from the right source. In an upcoming blog post, we’ll be covering how and where to find the right music. Sign up for our newsletter to stay in the loop.

An easy trend to spot in these ads is their focus on the ones we love. One of the biggest themes throughout all 13 Christmas videos is the idea that giving a loved one a present is the best part of Christmas – whether it’s a mother to her child, a monster to their friend, or a snowman to his love. Wanting to give the right gift is something almost everyone can relate to, and that is why this theme has worked so well over the years.

In 2012, John Lewis created “The Journey”. This ad hints on the trials and tribulations we sometimes go through to get the perfect gift. So many people take pride in finding the right present for a loved one and will stop at nothing until they can find it. The snowman in this film does just that, traversing rivers, mountains, and snowball fights to deliver the best gift.

For John Lewis, getting people to buy presents at their stores is one goal of these videos, and the gift-giving theme will hopefully get people in the mood to go shopping.

Start with brainstorming ideas that you know people can relate to. From there, see if you can tie it to your business. We did this recently with a Thanksgiving video. Food is something everyone can relate to, so we made a tutorial on how to film food properly.

This is a small-but-important point. While yes, these videos are of course an advertisement for John Lewis, they don’t feel like it. Throughout almost every video there is very little branding or obvious cues that this is connected to John Lewis at all – just a simple tagline at the end. Each year’s video is a whole new story, but the simple taglines stay relatively consistent.

“The Man on the Moon”, the John Lewis Christmas Video from 2015, ends with the simple tagline, “Show someone they’re loved this Christmas”. It refers to the video’s plotline – a young girl trying her best to communicate with a man living alone on the moon – but it’s also universal.

Other tags throughout the years include, “show them how much you care,” “some gifts are more than just a gift,” and “for gifts that brighten their world.”

Having minimal marketing messages lets the story and visuals do the heavy lifting. They provide entertainment for the viewer. These simple tags reinforce the story while strengthening the idea that John Lewis is a place you can find that gift for your loved ones. If you have a great story to show through video, this technique is an easy one to apply to any video.

Expanding Beyond the Video

While the last point mentioned simple marketing within the video, this point explains how to capitalize on that outside of it. In several of the more recent Christmas advertisements, John Lewis has introduced a new way to increase awareness of their product. The characters Moz the Monster, Monty the Penguin, and this year’s Excitable Edgar all launched with accompanying hashtags, landing pages, and physical toys.  These little extras not only increase engagement digitally, but also get people into the physical stores to experience the Christmas magic for themselves.

Moz the Monster of the 2017 John Lewis ad fully capitalized on this idea. The video was extremely well received and the merchandise was plentiful. John Lewis sold plush toys, books, mugs, pajama sets, slippers, and more all in connection to the friendly monster.

You don’t have to create a physical product to capitalize on this tactic. Expanding the story you create through a branded hashtag is a great place to start. Use that hashtag with anything related to your feature video and come up with ways to keep people engaged. That engagement could be: a poll on Twitter, giveaways on Instagram, or sign up bonuses on your website. This is a great opportunity to be very creative when it comes to expanding the message beyond the video.

More Than Just a Video Advertisement

Whether by chance or an amazing long-term marketing goal, John Lewis Christmas videos have risen above and beyond being just another video advertisement. One of the biggest reasons for their success is the sheer amount of people that anticipate the film each year.

In the UK, some would say the holiday season can’t begin until the John Lewis ad is released. Each year, millions watch the film, buy the merch, and talk about it with colleagues, friends, and family.

Unfortunately, this is not something you can replicate overnight. If the folks at John Lewis stopped after the first or second year they never would have risen to the level they are at now; their lesson is to stick with whatever project you’re doing. If you’ve received a good response from a recurring project, keep doing it; with time, it could grow to be something monumental.

How did we do? Let us know in the comments below if we missed any important takeaways from these John Lewis Christmas videos.