10 Major Predictions for Online Video in 2017 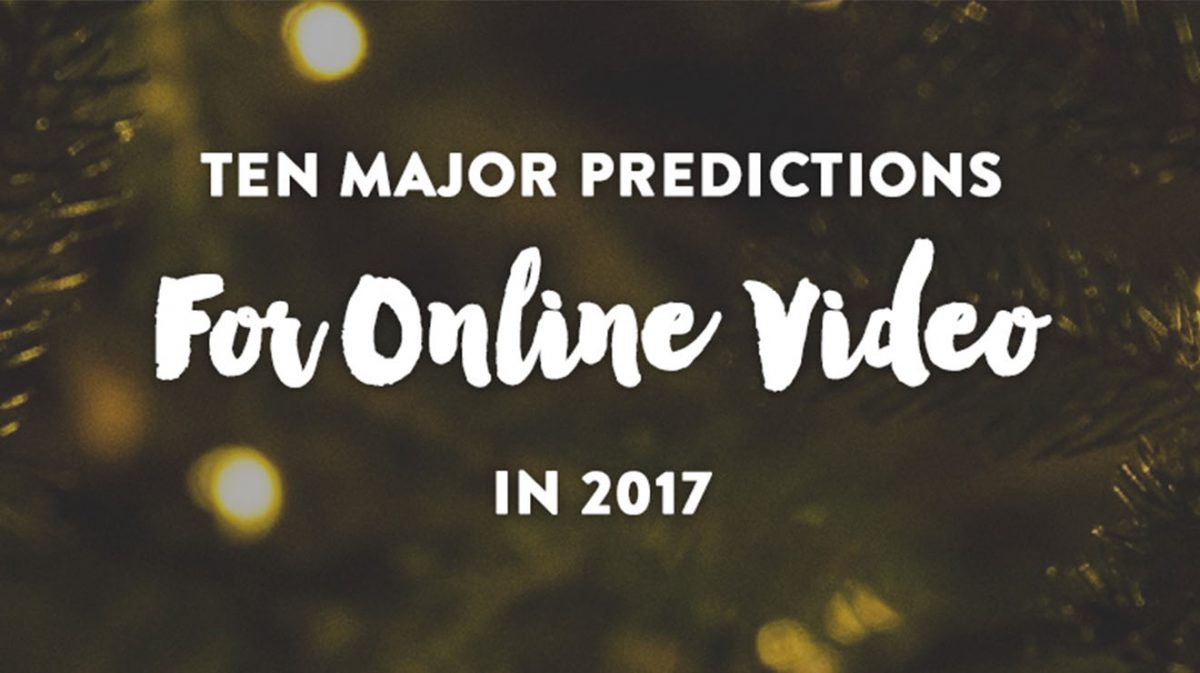 The end of 2016 is upon us, and what a year it was! Tumultuous at times, 2016 saw lots of ups and downs. The world of online video is no exception.

From provocative live video streams, to innovative uses for 360 video and virtual reality, 2016 offered a lot of surprising moments.

But, we believe the best is yet to come. To help you hit the ground running in the New Year, here are our top ten predictions for the continuing evolution of online video in 2017.

A trend that has been building for a while, we think branded content will continue to get better and better. As some standout examples have made clear, it’s nearly at the point where you might not realize, or care, that what you’re watching is sponsored by a brand.

For example, this video by Burberry is intended to build their brand and to reach new audiences through word-of-mouth. But, it’s also highly entertaining, beautifully filmed, and totally worth watching.

We think (and hope) we’ll continue to see more brands invest heavily in creative content people actually want to watch. This could potentially extend to full-length films, too.

Believe it or not, Flash still isn’t dead. It’s demise has been predicted for quite some time now, and is likely inevitable.

However, unless you have any bright ideas for ways to get everyone using a legacy browser or operating system to suddenly upgrade to modern versions, Flash will still be required for those people to consume certain types of content.

Of course, Flash is only necessary in increasingly narrow circumstances. Already, the vast majority of video we deliver through our platform uses our HTML5 video player. But, we still don’t see Flash going away completely in 2017.

3. Quality Will Continue to Improve

With the advent of 4K capable smartphones, and the ubiquitousness of UltraHD TVs and retina displays, consumer expectations for video quality were really high in 2016.

Video producers are mindful of that. Many already made the shift to 4K or 8K workflows. However, expensive hardware upgrades are usually required for that type of shift, so it’s been uneven at best. For instance, SproutVideo currently supports up to 8K video for playback, but we rarely see it uploaded to our platform.

As more consumer-friendly options enter the market for higher quality workflows, we expect to see better quality across the board.

4. Personalization Will Heat Up

Towards the end of 2016, the trend towards personalization of video content started to pick up momentum. Held back by complex, time-consuming workflows, we expect to see innovation and investment around tools that make it easier to produce videos intended for specific individuals at scale.

Why? Because they are highly effective. Whether it’s content directed at a specific subset of your target audience, or literally individual viewers, personalization drives engagement.

Over the course of 2016, several controversies over live video erupted. Sadly, many were tied to instances of violence.

As support for live video continues to expand across different platforms, we’re only going to see more and more of it. Consequently, the chances that it will cause controversy are only going to increase.

Also, it’s not clear exactly how privacy will be handled when it comes to live video, if at all. If you were on TV or interviewed by a news channel, you’d sign a waiver or consent form allowing them to use your image. Because it’s so decentralized, no such arrangement exists with live video online.

We expect the volume and intensity of controversies related to live video to increase in 2017. We are hopeful that progress will begin to be made on related privacy matters.

Virtual reality got a lot of attention during 2016, and deservedly so. It seems to hold a lot of promise for certain applications, like video games or training purposes.

Then again, it might never realize its potential. Virtual reality faces serious obstacles to becoming a mainstream activity.

First, the cost to produce and obtain virtual reality content and hardware is expensive.

Second, the human body struggles to orient itself in virtual environments, causing nausea and vertigo, among other problems.

The above activity would clearly be a terrible idea.

Finally, it’s currently a very isolated experience. If VR is going to be used for mainstream entertainment activities, and compete against other content, it will have to somehow become social.

In 2017, you won’t just see content from other websites popup in your newsfeed. You’ll see original content produced or sponsored by those platforms themselves.

Facebook just announced a plan to invest in online video series to kick start their video efforts. Similarly, Disney is producing a spin off of The Bachelor for Snapchat. Expect to see much more of this as other platforms get in on the game, especially if these early initiatives are a success.

Related to the first point, we think the volume of ads you encounter when watching online video might actually decrease. Platforms and and content creators are fighting a war with ad blockers and ad skippers, and dealing with bad data on video ad performance. At some point, a different tact is warranted.

We believe that as more brands get involved in making great video content that people actually want to watch, the need to produce blatantly advertising material will diminish. We also very much look forward to the realization of this trend in particular.

As companies have come to realize the ROI of video, as well as the important role it plays in internal communications, more and more will move video production in-house. It’s the easiest way to increase the amount of video you’re producing, and to maintain consistent quality and branding over time.

A boon for videographers seeking full-time employment, this trend will greatly increase the volume and efficiency with which companies produce content.

Whether you like it or not, chances are you’ll wind up watching even more online video next year than last.

This is guaranteed to happen partly because there will simply be more of it. Video will be more ubiquitous than before, as more and more platforms start pushing it and competing for your attention.

Another factor is that you’re probably going to want to watch more of it. As quality increases, you’ll be more entertained than ever before. Sure, you have to sleep sometime, but we think you’ll do so only after binging on even more online video.

How To Produce Interview Videos That People Actually Want To Watch